Ephemera contributions from printers old and new are very welcome for the April 2019 mail shot and be assured, irrespective of the numbers entering a piece, we shall be sending a set to every paid up OGP member.

If you haven’t taken part before - do think about joining in. The choice of what you produce is completely yours; as long or as short as you like, including a found block, a fleuron, a lino cut, a wood engraving or just text, everything is acceptable. It isn’t a competition, just a bit of engaging fun to show others what amuses you.

Please email your intent to be included to Margaret Condon who, having made slow recovery from her broken leg, has agreed to mastermind collection and collation. Completed ephemera sets (140 copies, maximum A4 size) should be sent to her, delivered to the OGP table at the November Wayzgoose or to the Chairman at any Guild meeting up to the beginning of March 2109.

Out of the need of a member to learn how to use the press he had just bought emmerged the idea to record emminent printers demonstrating the use of various presses. The first of these, filmed by Brian Clarke, features Graham Moss of Incline Press using the Anglo-American Arab Press. The DVD is available to buy: £10 (£5 to OGP members) + £2 postage available from the Chairman.

A prize of £100 is to be awarded to the book or booklet that, in the opinion of the judges, best represents the spirit of private press printing and publishing.

Entrants do not have to be exhibiting at the Fair (nor members of the OGP).

An account of this inaugural prize (to be repeated in 2015) by Liz Adams, one of the judges, follows:

The Guild’s first Private Press Prize attracted a healthy amount of interest, with the judges retiring to the Lecture Theatre clutching more than two dozen entries. After an initial run through the serious business of whittling down the competition began. We considered each entry according to a number of elements including the quality of the printing, the design and layout, the binding, the materials used and, not least, the content itself. Whilst admiring the many hours of work put into each entry, we were pleased to give the prize to Rosemary Roberts of The Celtic Cross Press. We hope next year to repeat the process, and will be asking members to volunteer to judge the prize. If anyone is interested, please let me know. Liz Adams

As long ago as 2009 the Committee decided to sponsor a short story competition, the winning entry to be printed letterpress in a limited edition as the prize.

Dr John Ballam, of the Department of Creative Writing at Oxford University’s Department of Continuing Education was an enthusiastic supporter of the project from the start, becoming responsible for its promotion. The competition was open to all students, past and present of OUDCE and University student; the entrants should not have had fiction previously published: the work should be limited to 2000 words.

All entries were sent to the Chairman and forwarded anonymously to Dr Ballam who, together fellow judges, made a judgement. There were over 120 stories submitted, several of a very high standard. By the end of July a winner was announced: Louise Irhinger for her story It’s Unfortunate for the Ants.

The book was designed and printed by John Grice of Evergreen Press, typeset by Stan Lane of Gloucester Typesetting Services in the autumn and casebound by Patrick Roe of the Fine Book Bindery this spring. The Guild is most grateful to these members for their contribution towards a fine production.

At the time a writing a presentation to the winner is planned perhaps in May.

Copies of the book are for sale.

Typeset in Monotype Dante by Stan Lane, designed and printed by John Grice and bound by Patrick Roe on Magnani paper. 150 copies 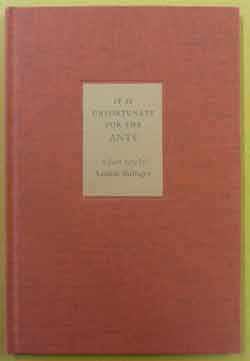 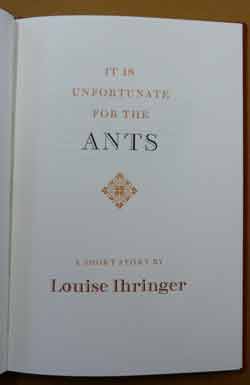 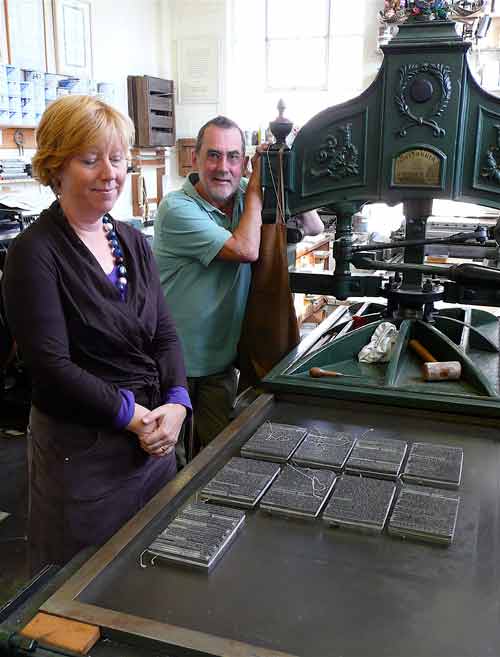 Louise with John Grice examining the tied-up type for the sheets. 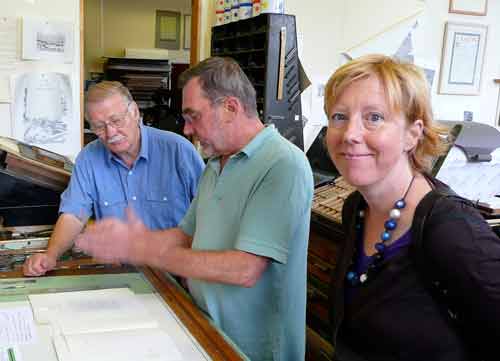 The Oxford Guild of printers actively promote letterpress printing and fine book production being involved and sponsoring a number of projects.